Warning: If you are used to reading Japanese manga, take note that the text in the following image is read from left to right. XD 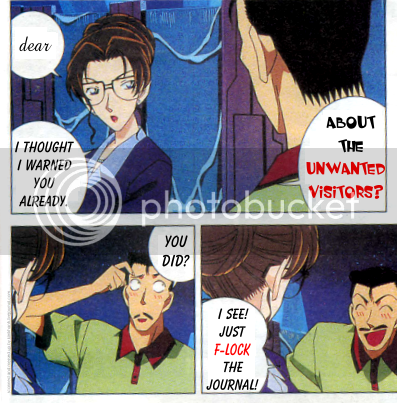 Yes, people, you got that right, as of May 20, 2009, this journal is officially friends only. After more than two years of being mostly public, let's just say I'm getting a bit paranoid about security, in spite of my Internet anonymity. D: Please do comment, I pretty much accept anyone! ♥

If it's the fanfics that you're after, you may find them in my fic journal,

Good day, and peace out, everyone! ;)

Joined some really awesome blogcrews at

snifflesniffle last Monday, and I figured it'd be better to create a separate post featuring my claims, instead of letting them clutter my profile—some people are bothered by them, anyway. ;)

For those who care, here they are:

Because yesterday's senatorial hearing on the Manila hostage crisis was so idiotic, I can't even come up with a title.

In the said hearing, media executives were probed by some of the senators, and I must say, I was disappointed at how it turned out. If I remember correctly, it was Sen. Vicente "Tito" Sotto III who said that the whole point of the hearing was to help the senators in legislating a law (or laws) that would regulate the media in matters, which I assumed, of emeregenices, or when human lives are at stake. I was actually open to the idea, though I have yet to decide on my stand on the issue. If it would help save lives, then, why not?

At the end of the hearing, though, I changed my mind. Some of the arguments posed by the senators were utterly ridiculous, not to mention going round in circles. I can't believe one of them even had the nerve to blame media for the success of the September 11th terrorist attacks! That it's the media's fault why the Philippines has such a bad image on the international front! Why? Should the image they should present to foreigners only be a positive one? (For a moment there, I was reminded of North Korea.) If we Filipinos have a right to know about other nations' dirty laundry, then why couldn't they know about ours? Honestly, it's beginning to sound like censorship, and I don't like it one bit. I'd rather have the media regulate themselves, than for our senators and congressmen to create laws, which can possibly be manipulated by government officials to curtail press freedom. I've never experienced growing up during the martial-law years, nor would I want to. But it sounded like that's where this country's heading for, with matters regarding press freedom at least. No, thank you.

What's even more annoying is that some of these senators are actually lawyers, who should be proficient in the art of proper reasoning. But no, they just really failed. Utterly. Your appeals to emotion have totally backfired—in my eyes, at least. How I'm glad I was too young to vote for you back in the 2007 senatorial elections.

My own line of reasoning may be wrong, but, at least, I know better than to pin the blame entirely on the media.

And I'm just so pissed off that I'm going to make this post public. It would probably never be read by most people, but I would be missing my point if I impose censorship on myself, wouldn't it? I already self-censor enough as it is.

Yes, another meme post! *is shot* Because my self-esteem is really crushed, and I can't view myself objectively. The original can be found here.

So I have to complain about myself, huh? I can easily come up with a list. *is, as what her youngest sister

moonlitdawn calls her, a defeatist*


And now, for a bit of life babble. So my brother has just come home. Turns out he's won an Academic Award and a Leadership Award. He also brought home three certificates stating he's been on the Dean's List for three consectutive terms this school year. (His school has four terms per year.) I know I should be happy for him, and all, but I can't help but be jealous and bitter. It just really sucks to be a disappointment to my parents, unlike my siblings, you know?

Post anything you like here, but post it anonymously. It can be something big or small, whatever you feel compelled to. Maybe a (1) story, (2) secret, (3) confession, (4) fear, (5) love—the possibilities are endless. Be sure to comment anonymously, though.

Feel free to say anything! :D I'll comment back if I can. ;)

Oh, and before I forget, a belated happy birthday to you,

Okay, so after not updating my LJ for ages, I bring y'all a meme from my sister

genicakes). This should be fun.

candy__chan, a bit of blatant fic plugging (why didn't I do this before?):
Grieving for

30_tears: Shinichi and Ran
The First Day Blues for

All fanfics are posted at